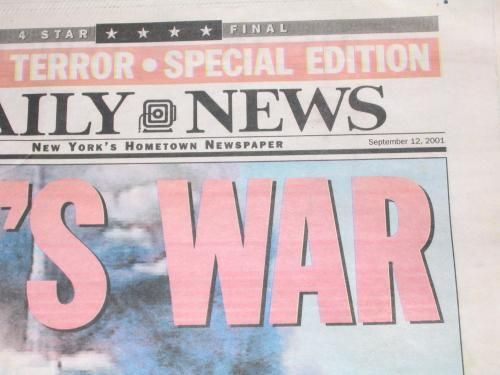 Nine twelve, left exactly a week later, not because I wanted to hijack a plane as soon as it was legal to fly but because that was when my flight was scheduled. I would have stayed for the winter, for the women but I have a tropical personality.
It was already rediculously cold, finished FFIX, didn't have cable and so the events that onfolded were the only programming I (or anybody else) could watch. It so happened that all the local chanels were on the north except ABC and another spanish channel. Both had all week continuous coverage. And I was watching every second of it. Not a good way to end your summer vacation.
I simply hate when significant historical events happen, especially in my life time. In a hundred years from today, the news headline will be "20th century sucks big time" or "britney clone half price special end-of-century offer, one per household, must have 4.0 GPA or better" .